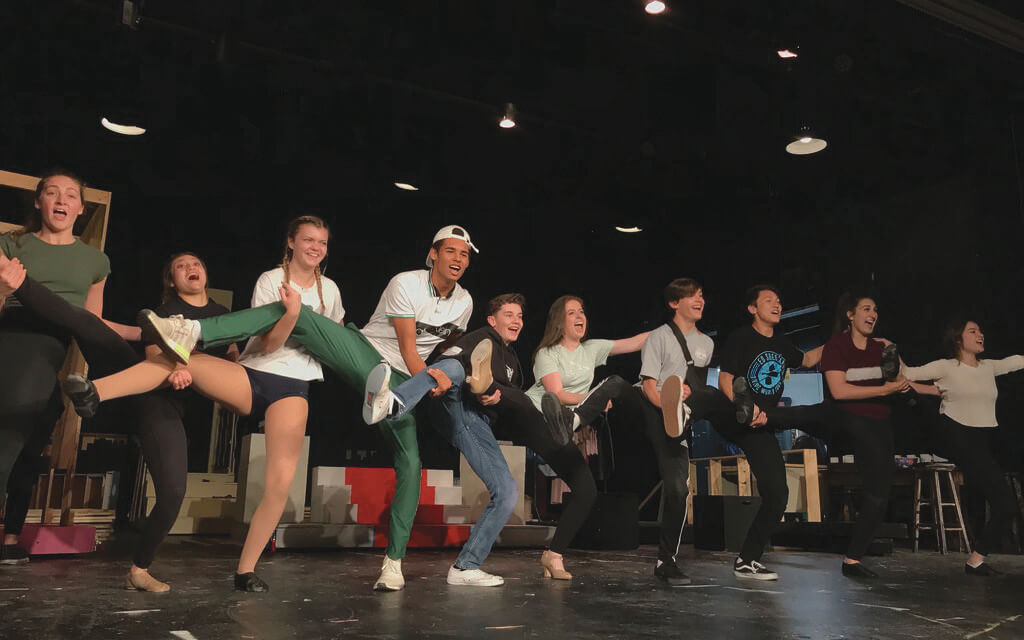 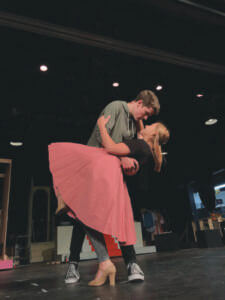 Feeling a romantic connection, Carson Preusse delicately dips Hannah Frank and holds her in his arms.

My Favorite Year, a musical written by Joseph Dougherty, follows a new writer’s crazy journey around New York City as he watches over his rebellious movie star idol. Trying to jump from new man on the job to head writer of King Kaiser’s Comedy Cavalcade, Benjy Stone, played by Carson Preusse is assigned the job of making sure movie star Alan Swann, portrayed by Garrett Higgins, stays out of trouble. With a commanding stage presence, King Kaiser, played by Hunter Keene, runs Comedy Cavalcade as he bosses around his team of writers, including Benjy. An estranged daughter, over-protective mother, musketeer comedy sketch, and a second date proposal all weave their way into this entertaining show.
Since December, the Tesoro High School Theatre Department worked countless hours learning dance choreography, building the moving set, painting the stage, making props, searching for sound cues, designing makeup looks, buying wigs, bedazzling costumes, lighting the set, and staging the musical. Although the designers faced challenges along the way, students stayed within the budget constraints and thought creatively. Taking the audience to several different locations in New York City such as Central Park, an apartment in Brooklyn, the Plaza Hotel, and a TV studio, production assistant Caitlyn Vera is most excited about the “…detailed painting for the Central Park flat, with all its trees and leaves.” Intricate and embellished, the props are designed to provide details to the show. With 1950s hand-made cigarette trays and a moving camera, the props crew transports the audience to a TV studio. To engage the audience in the show, loud, exciting sound cues such as hearty laughs, chiming bells, clanging of swords, and the flushing of a toilet will blast from the surround sound system. Wanting to emphasize the glitz and glamour of New York City, Faith Moore and Kellie Petrosian sewed gleaming rhinestones onto dresses. For the song “Professional Showbiz Comedy”, the costume crew sewed patches of different patterns onto the clowns’ crazy pants. Makeup designers created elegant updos for the lead roles in contrast to the low ponytails for the ensemble. Overall, the crew with their admirable technical skills brings the show together.
Although there are long rehearsals numerous days of the week, Hannah Frank enjoys “…seeing how far the show comes from day one to its completion on opening night.” The director, Cheryl Des Palmes, teaches students acting and technical skills, while creating a lively and interactive working environment. The choreographer, Cris Stuart, weaves backflips, splits, cartwheels, and turns into the dance numbers. Even though the choreographer pushes the students to execute the moves perfectly, Sammy Schwartz enjoys “…dancing on stage as [she] feels the high energy from the audience.” Students learned and rehearsed singing, staging, and dancing five times a week. Additionally, students with lead roles memorized lines and song lyrics, while students with ensemble roles created unique characters. Carly Sherman loves to be involved in shows produced by Tesoro Theatre Arts because she “…learns about the process and steps it takes to finish a show.” Throughout the process, students learned from each other and worked with each other to create a successful show.
Tesoro’s children friendly production of My Favorite Year runs April 25th through the 27th and May 2nd through 4th. Tickets are available at https://search.seatyourself.biz/tesorohighschool/ or at the door. Captivating and hilarious, this show is one that everyone must see.

This legal notice expires, and will be moved to the archive, on Sunday May 5th, 2019.